The main focus of the collection is on motorcycles from before 1940.

Underneath you can see a picture of a Pope from 1916. This American motorcycle has been imported in 1916 by the well-known firm Stokvis. 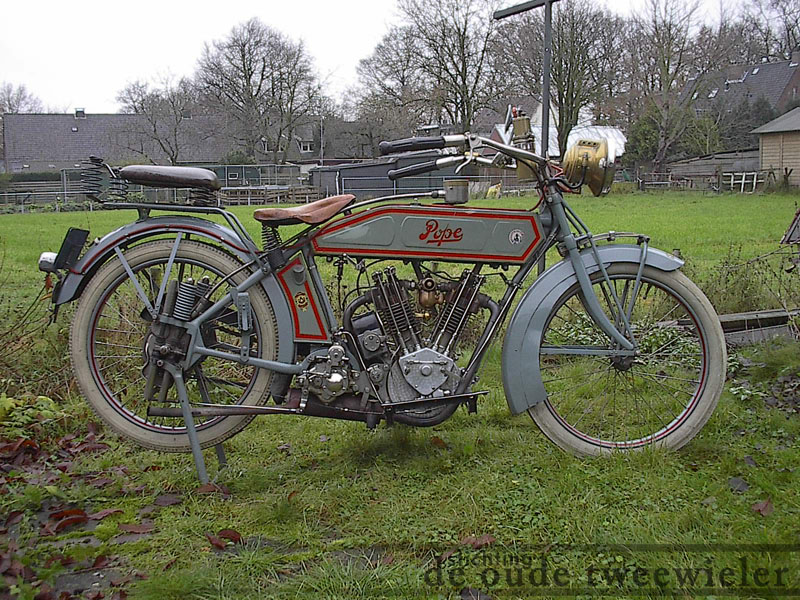 Pope motorcycles are manufactured in Hartford Connecticut, between 1911 and 1918. Pope manufactured at that time bicycles, motorcycles and small cars. Nevertheless it still was a small factory. At the end of 1917 the production of motorcycles was stopped. The model showed at the left was the second fastest motorcycle of its time. The two cylinders (V-twin) with 996cc and open overhead valves combined with the 3 gears generate a performance of 25 horsepower. Remarkable is the back suspension of this motorcycle. This construction has been copied by many brands in the late thirties. The oldest information about this motorcycle is that the motorcycles was registered by H.T.Hoving in Groningen. Stokvis had a sub-office in this city. In the period from 1918 to 1923 these scooters were very popular in Britain. This was caused by the increasing participation of woman in traffic; the vehicle was an ideal means of transport for them. The scooter has a 143cc Norman overhead valve motor and its top speed is at 30km/h. Kenilworth was one of the smaller companies; it shuts its doors in 1924.

The Simplex motor, as showed below, has been sold as new in 1921 by the Simplex factory located at the Overtoom in Amsterdam. The registration year of this motorcycle was in 1920, but it was sold in 1921 (as a overjarig model) with a huge discount. Simplex build very small series of motorcycles. In the early sixties the company activities of Simplex were ended.

This motorcycle has always been driven in the surroundings of Haarlem. This model, with a 500cc motor, was the lightest 2 cylinder that Simplex produced. The motor is supplied with a belt drive. Furthermore you can see the original receipt belonging to this motorcycle. 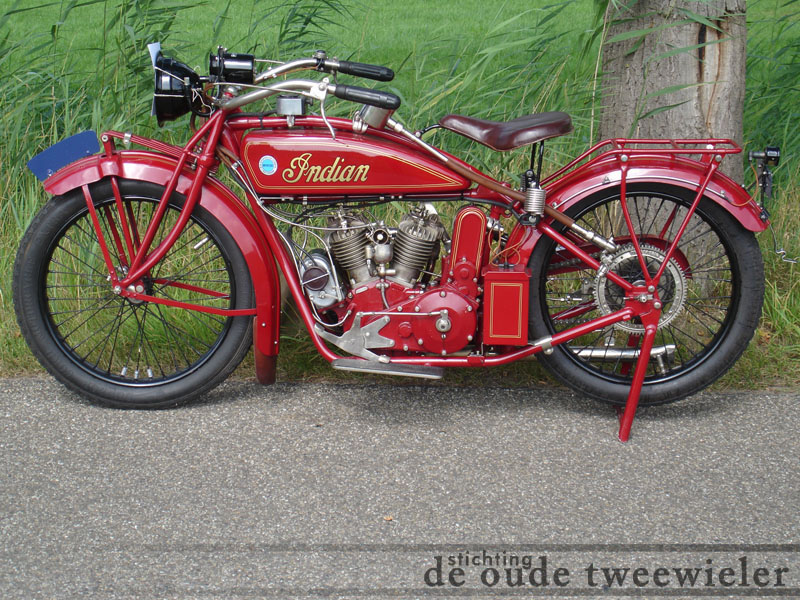 Above you can see the unrehabilitated 600cc Indian Scout, from 1922. This motorcycle has been purchased in 1977 in very bad conditions. Last years a lot of time and energy has been invested to get the original look of the motor back. In the twenties and thirties the motor had a tough time and when it came to us it was pretty demolished. But since we are third owner the history of the motorcycle is known. On the right picture you can see the fully rehabilitated Indian in all its pride. 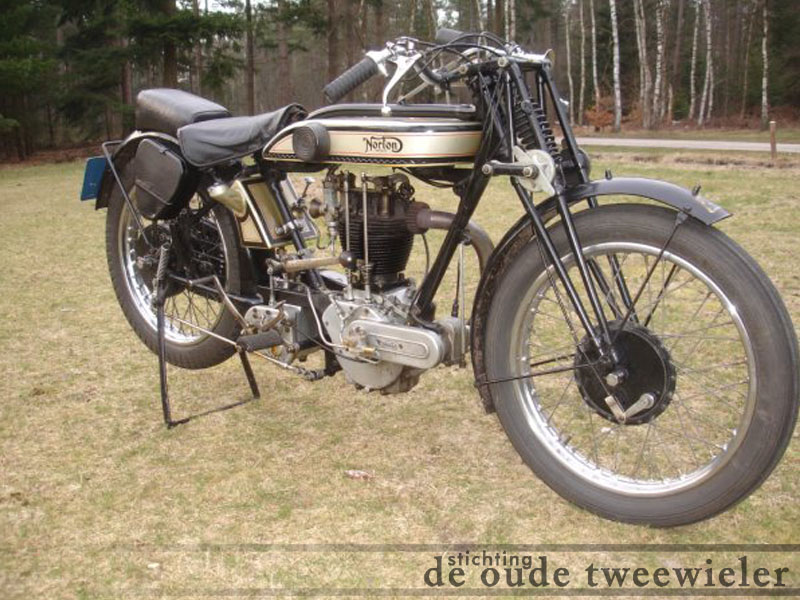 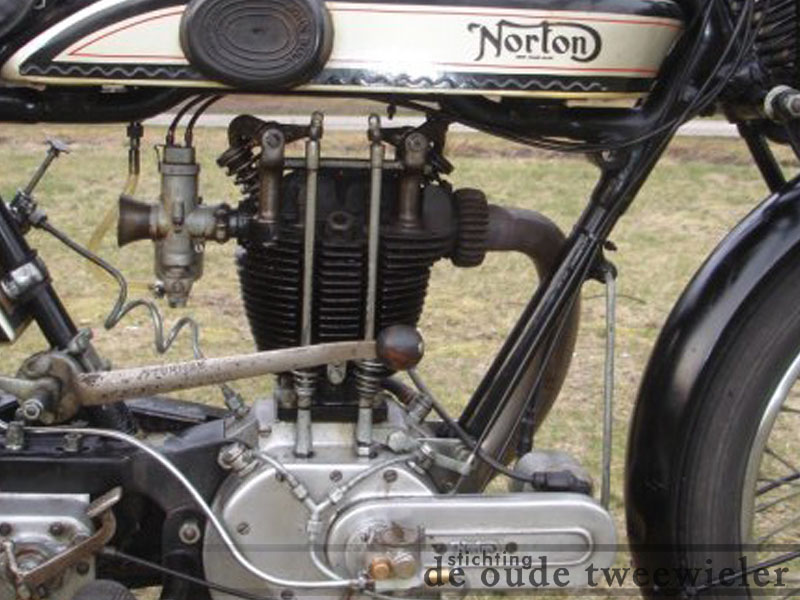 In late 1923 Norton builded his first overhead valves engine, Model 18. This 500 cc engine was very fast and reliable. In 1924 Alec Bennet won the TT with an average speed of 96 km/hour. That year the Norton won many races in France, Spain, Belgium and Ulster. In that period the Norton Model 18 also won 52 beach races, 32 races in the mountains and 39 speed trials. A famous person, even in the Netherlands, was Stanley Woods. He won many different races with the Model 18. The glorious days of this model lasted until 1928, then Norton builded his first overhead camshaft, the CS1. This was the start of a new period with many victories for Norton. This is an Indian Scout from 1927, the big brother of the Indian above. Not many Indians from 1927 can be found in Holland. In this period the economics went downwards and people did not want to buy a new motorcycle. This Scout drove in Holten, after the second World War. It is nice recovered and complete. 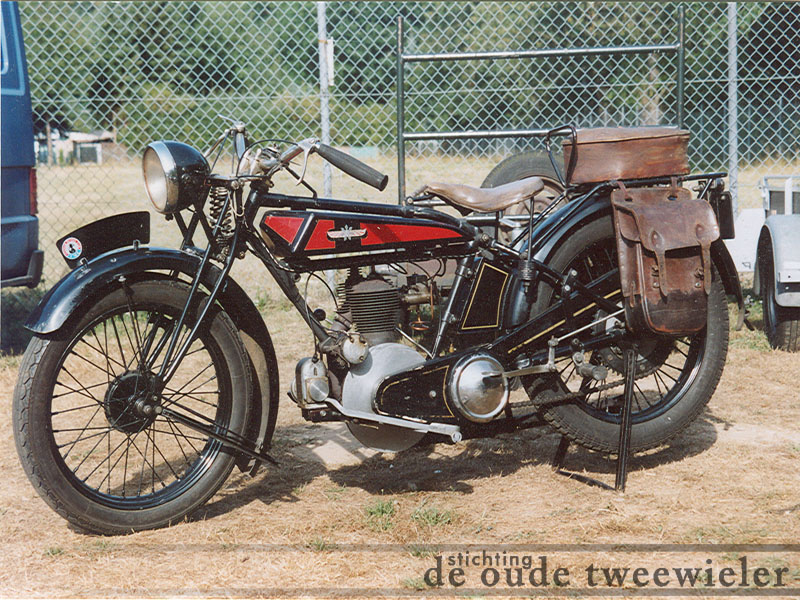 The showed Gnome et Rhone is a 500cc side valved motorcycle from 1927. This French motorcycle is provided with a big external flywheel. This is one of the reasons that it runs very smooth. The headlight is replaced for a more suitable one. 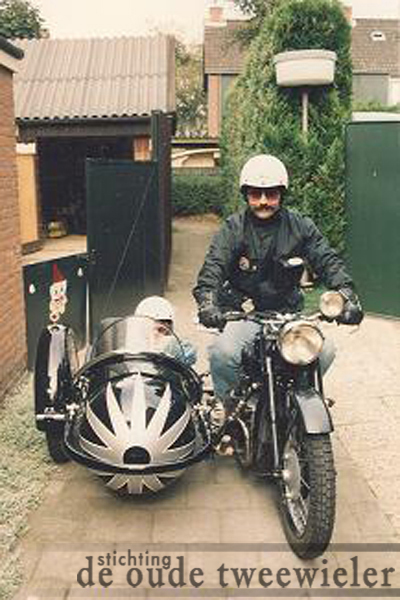 This is a 1939 BMW R61, 600cc side valved motorcycle, with a Stoppa sidecar also from 1939. This BMW has been sold newly in 1939 in Apeldoorn, but within 6 months totally detached and hided under the floor. This was because the entering German forces had all the lists from dealers with delivery addresses of the motorcycles, so they could use them for their own army. Only 4200 pieces were produced of this type BMW. In 1939 the price was around the 1000 Dutch guilders (approx. $400). For this amount you could also buy a Norton International with much more power than the 18pK of this BMW. The history of this motorcycle is also familiar. In 1983 it was taken over from the first owner’s son. To the motorcycle a luxuous side car is attached. In the Netherlands this sidecar, completed with a braking sidecar wheel, costs at that time fl 260,- (approx. $220).